June 21, 2018
There are many perks to being a resident of the Bluegrass State, but one of the definite downsides has to be the fact that you're landlocked.  While Kentucky has its share of beautiful lakes (one of which is in the county where I live), we are not blessed with salt scented air, sandy beaches, gorgeous water, or waves. 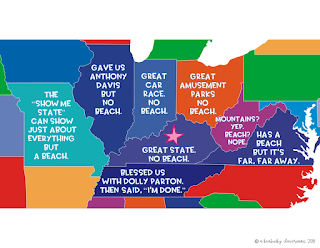 So should one have a hankering for salt scented air, sand, clear water, or waves, you must traverse outside Kentucky.

And while every personality test I've ever taken scores me as a 99th percentile extrovert (which strikes me as accurate as my mother began refusing to go shopping with me because, "you know too many people and have to talk to everyone and it takes forever to get out of Walmart"), I genuinely treasure time to myself.  Probably because I was an only child for five years, but it is no big deal for me to do stuff like supper, movies, or even going to the bathroom solo.

Last (school) year was somewhat more demanding than I anticipated; thus I decided if I could find a trip to someplace tropical at a decent price, I would pack my bags at a moment's notice and go.  I also decided this trip needed to be just me, even though it was an incredibly selfish decision.  So I watched and waited, and once I was certain my trip would not include an encounter with a hurricane or tropical storm, I booked a week long trip to Jamaica.  Because it was a somewhat impulsive trip (I booked the trip on a Thursday afternoon for a flight that would leave that Sunday morning) I didn't tell many people about it. This trip gave my father two good reasons to worry: not only would I be traveling alone, but I would be headed to a place I'd never been before.

My father was not the only one concerned for me: if I had a dollar for every time someone advised me to "be safe" or "be careful" I'd have been able to to straight up buy Jamaica.  I'd also like to take a moment here and point out that it's laughable people told me to be careful.  While I was headed to an all-inclusive resort, that was as wild as I got.  I don't drink, do drugs, or even stay out late.  I was going down there to simply relax, not find love or even make any new friends.  I didn't even want a fabulous tan.  I would be perfectly happy to simply drink Coca-Cola on the beach, read, and listen to the ocean.  Therefore, every time someone advised me to be careful, those words were met with an internal, "Surely you jest.  You know nothing's gonna happen".

Fast forward a week later and I'm back on American soil, refreshed and still white as a ghost (seriously, I'm nearly glow in the dark I'm so pale).  Other than a two and a half hour flight delay going to Jamaica, an hour delay leaving Jamaica, and it taking two and half hours to go from the runway in Cincy through customs and out the door, everything was amazing.  And I'm not too proud to admit that while leaving the Valu-Parking Lot I was pretty full of myself-I'd experienced a wonderful break and not a thing had gone wrong.

According to Google Maps, the Cincinnati/Northern Kentucky International Airport is 127 miles away from my home, with the average driving time being 2 hours and 10 minutes.  It's important that you understand the mileage and estimated driving time because I didn't pull out of the airport until around 8:45 p.m.  The sun was beginning to set and I was hungry as I spent my free time at Sangster International Airport acting like a tourist-trying to hit as many stores as I could trying to find my dad a gift for Father's Day (less than 24 hours away) and then introducing myself to the lady in the airport who had on the exact same shirt as me and asking if I could get a photo with her because I'm fairly confident never again in my life will I be in another country and see someone wearing the exact same Kentucky teacher shirt as me: 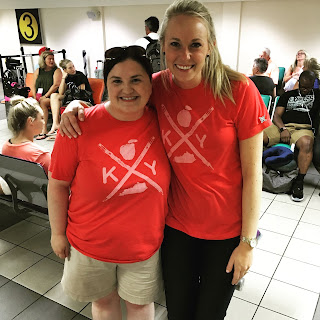 So about 30 miles south of Cincy I pull over and hit McDonald's and pull back on the road.  By this time it's almost 9:30 p.m. and dark, but I'm not thinking about that.  So whilst doing 70 mph on I-75 South, what happens but that light comes on.  And the temp gauge goes red.  And while I love the color red, I don't like it when it's glaring at me from my dashboard.

Long story short: my car overheated.  Upon calling my parents and admitting that things were going less than smoothly, I called AAA.  At 9:35 at night.  They were incredibly kind and said they would send someone to assist me and that since I have the gold membership my car could be towed for 100 miles before I would be charged.  I happened to be about 94 miles away by then, so this was music to my ears.  So they said they would list me as a priority, and my tow should be there by 10:40 pm.  Then, I kept getting texts saying my case had been updated and my help would be arriving later.

But because I believe in looking for the good in any situation, here, in no particular order, are the good things about being stranded in Corinth, Kentucky on a Saturday night.  You may alternately refer to this as...

Popular posts from this blog

We Know About Labor

Today, I had a surprise walk-through observation. At 2:00 p.m. On a Friday. And because we had just finished a math assessment, we were watching Reading Rainbow. And eating Fruit Loops. But please don't mistake us for slacking off. One of my students was fast asleep-with her pencil still in her hand, poised in the writing position. Should you more evidence that kindergarten is rigorous, check out the photo below.  Upon discussion of what a good citizen looks like, the sweetest child in my class had us scribe this: And with that pic, I wish you and yours a very happy Three Day Weekend! Labor Day!
Read more

July 17, 2012
Confession: Now that "The Closer" is down to the last few episodes, I'm not sure if I can focus on much else.  I have my suspicions about the leak and how the show will end and am awaiting to see if they're correct.  But since the show's on once a week, I need something to occupy my thoughts.  And what's better than ironing out how to use D5 in a classroom?  And reading how your fellow bloggers implement D5? Of all of the choices, Word Work is the most challenging to me.  Which is why I'm super psyched about seeing how the K crew is implementing it.  But here are my thoughts: Experimenting with words for learning and looking for a spelling pattern.   Since I'm new to kindergarten, I'm assuming there will probably be the widest range of abilities in this grade than any other.  (I should probably point out I've taught 1st-5th, so I've earned the right to make that assumption.)  I am expecting some to arrive with no letter-sound knowledge, so
Read more